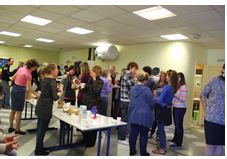 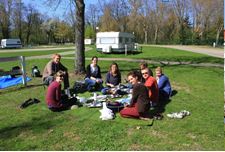 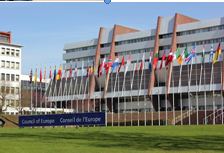 France Overland at Easter...
After a couple of years’ worth of chat and prayer and recruiting and visits to Nottingham, we finally set off on 30th March with the first student mission trip from Joshua’s church (He is the church Student Pastor).  It took a lot of administration and persistence and flexibility but we were off, together, Marseille bound!
But first a detour to Strasbourg to meet with a couple of missionaries who work amongst people from all over Europe who are connected to the European Parliament, the Council of Europe and European Court of Human Rights.  This couple spent a day with us explaining the purpose of each EU Institution and some specific things we could pray about in each place.  The group highlighted this as one of their most significant times of learning & prayer.


This was my first visit and we connected with several WH staff and an excellent, lively, mission minded French church – I was very impressed, WOW!  This French speaking church was made up of many nationalities (though majority French), had members from all age groups, had some Muslim background believers in Christ, was looking to reach out to its local French and immigrant community and was involved in mission trips to Algeria and Libya that month.
We spent a day in the city and went up to a high place to worship and pray over the city, had an afternoon swim at the beach, helped with the boys and girls school classes during the week, were hosted by members of the church, walked around the community giving fliers for the Easter church service and organised an English evening.  An English evening was just what Joshua (American) and I (Scottish) were prepared for!
The evening involved games, a quick English language lesson and cooking 50 baked potatoes and making various toppings.  A couple of mornings were spent in the community again to invite locals to the evening.  The church said it was great to see so many new faces, including 2 local
Muslim families - one of these women was so happy that she was the last to leave & gave everyone a big hug.
‘Mission’ and ‘evangelism’ don’t need to be tough or hard work!  An invitation to an evening with food, then a simple friendly chat at the dinner table as you eat.  This simple and natural expression of love can change people’s lives!


In February Corne felt strongly to do something 'small' to raise some money for the famine in the Sahel region at the moment.
World Horizons have strong links to local communities and churches in Burkina Faso and Niger and are well placed to help some of the most at risk including widows, orphans and the sick.  Grain prices have doubled in some areas and will continue to rise.


So all the money raised goes towards buying emergency grain for those hardest hit by the current food crisis.  It is currently £40 a sack of grain.
So we (Corne and a small team of helpers) held a Swishing Party on the 5th May - IT'S A CLOTHES SWAP PARTY - for those wondering.  We had lots of cakes and STARBUCKS coffee (donated by our local Starbucks) It was generally a great atmosphere and Praise God we raised £821! 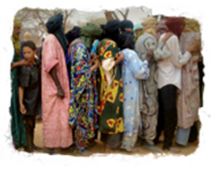 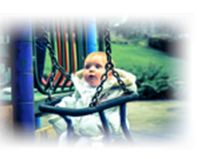 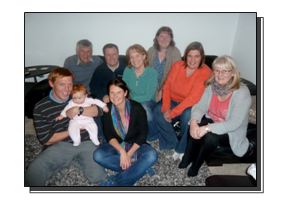 With friends at our new house-group

Posted by Link Church, Dunfermline at 02:50