"Having a good quality education is essential in order to break free from a cycle of poverty. We believe the next step for Soul Action is to partner with the department of Education in order to train and support teachers to teach basic phonic skills. Our aim is to pilot this in one community with six schools during 2014 and 2015. By partnering with local projects, schools and the Department of Education, we believe that we're giving children the opportunity to develop into the people that God intended them to be."
(shared by Rachel during their UK visit last year.)
Just a few days after returning from the UK in mid-July, Phil & I were facilitating training. At one point Phil asked everyone to get into pairs & to listen to God for how He ‘delights’ & what He ‘sees’ / ‘sings’ about the other person. I partnered with Tami, who amongst other things, felt God gave her a picture of a stage door and steps leading to the stage. She felt God was saying:

"The prep and rehearsals are over; you are ready and about to step on to your stage"

– although Tami didn’t know what was going on in my life, I knew straight away this was about literacy! Recently, I was reminded how the literacy project had begun with 20 children meeting in a hut in a township. After five years of seeing 1,000’s of children benefit daily, refining our approach, and training a team of local ladies to facilitate the program, I knew it was time for the next step. It is time to take what has been learnt in the past five years, plus my experience of teaching in the UK, and to start to work directly with teachers. Tami’s (God’s) words were confirmation. 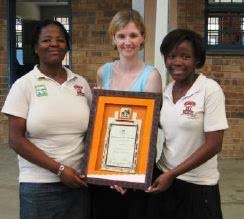 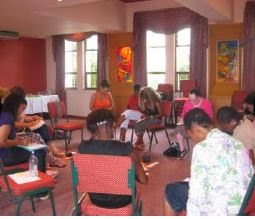 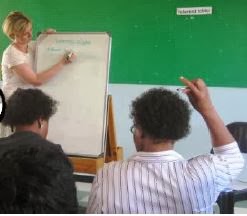 By late July, the Department of Education & 6 new schools were on board; all we needed was the funding! During the second half of 2013 I worked with rotary clubs in Durban and our hometown of Stoke-on-Trent to try to secure funding to enable this to happen. It was a relatively easy process for me, as most of the work was done by key people from the two rotary clubs. All I had to do was provide the info they needed for the application. I am deeply appreciative for the amount of effort they put in.

On 6th Dec, which is the last day of the school year in South Africa, we received an email to say the funding had been approved – you can imagine the celebrations that took place! Over the next year, we’ll be working closely with 17 Grade 2 teachers and six Heads of Department from six schools, facilitating workshops, providing support in the classroom context and organising drop-in sessions; all with the aim of empowering the teachers to facilitate phonic lessons for the children in their care. The first workshop took place this week & all the resources are ready to be delivered – more about this in our next newsletter.

To facilitate the literacy project in one of the community’s we work in, I (Rach) train, mentor and support four local ladies, who in turn work with 950 children to develop phonic skills in order to read and write in English.

Although their economic backgrounds means the ladies face many challenges, their roles on the literacy project has meant that they are all now training to be teachers; studying with an organisation called UNISA (similar to The Open University). The ladies teach literacy in the mornings, and use their afternoons to study. They’ve shown great perseverance, but still need support in achieving their goals.

So, at the start of the year, I made space for each lady to consider their goals for the year. They all knew what they wanted to aim for instantly, but then needed much more time to discuss and consider what they would actually need to do, i.e. the steps they needed to take, or what would be useful to put in place, in order to achieve their goals.

During the year ahead we will refer back to these goals, to reflect and evaluate where they are up to, and to think about any changes they want to make.

As part of their degree, each lady has to spend one month a year on teaching practice in a local school. In August of last year, Ntombi went through her first teaching practice. You can imagine my delight when she told me in Jan that she passed with 92%. I am so very proud of her!!! 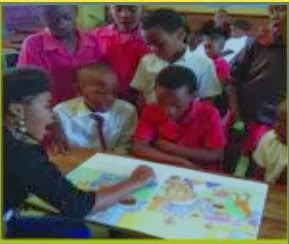 Ntombi is developing into a gifted teacher.
PRAY FOR:
Finances to enable the ladies to continue to study
Home environments that remain stable and secure
Growing confidence in themselves & in the classroom 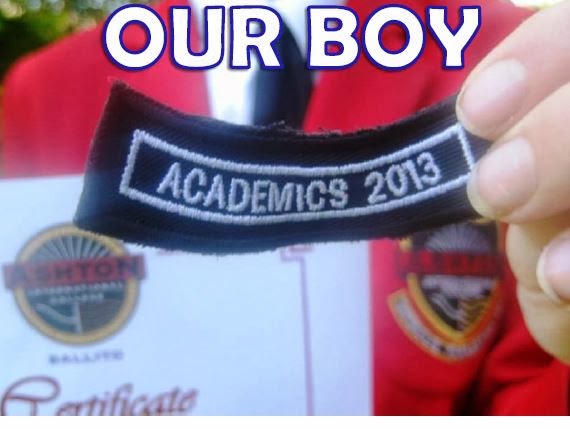 In December Phil & I had the privilege of attending Zac’s High School awards ceremony. Its a special occasion for parents, and one that we’d like to share with our family & friends who weren’t there, but who invest time, energy and prayer into us as a family as well as our ‘work’ life. Those who know Zac – in person or through articles he’s written over the past 6 yrs – know he’s a smart boy and a hard worker, but Phil and I were absolutely delighted by his 83% average for his first year at his new High School. Currently he wants to go into music production – the same week he was awarded Academic Colours, he passed his DJ exam with 100%. In January Zac began studying for iGCSE’s. Before we know it, he’ll be choosing his A Levels!

As well as high marks for his favoured subjects, it pleased us that he scored in the 70’s in some of his weaker subjects, incl. Afrikaans, which isn’t easy, when most of his peers have family members who will speak it.


PRAY FOR:
Zac, as he settles into his second year subjects

Rachel, as she home schools Zac in Business Studies

Phil, who tries his best to help Zac with his Afrikaans
﻿